Just in the Nick of Time. How on Earth Does Santa Do It? 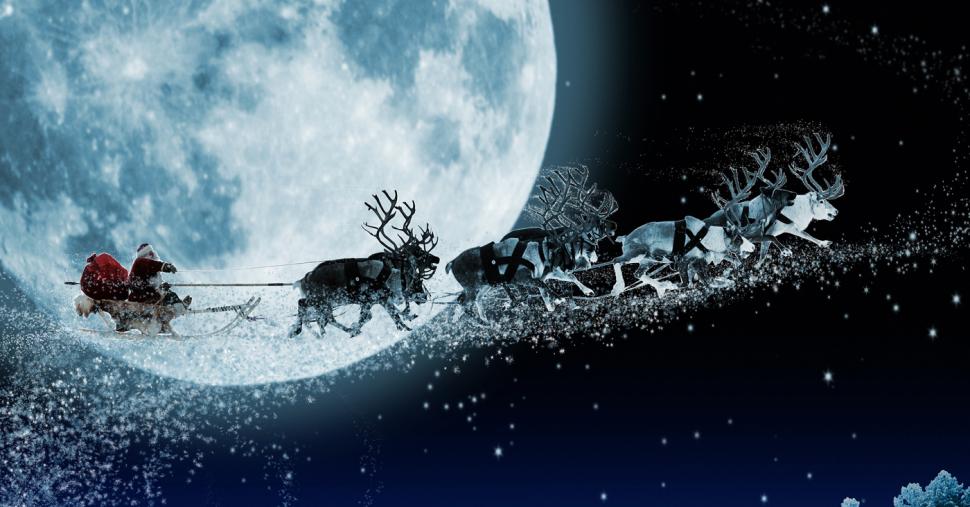 We all know that Santa exists; that’s a given. But, how he manages to deliver such an enormous pile of gifts in an unforgiving atmosphere with immense time pressures is, quite understandably, a topic of much debate.

Firstly, let’s take a moment to consider the challenges faced by our bearded friend and his trusty team, not least how one manages to fly a sleigh laden with gifts at what equates to speeds of 10,703,437.5km/h.[1]

Maybe it’s the magic of Christmas keeping Santa travelling at such speeds without so much as a sonic boom or dropped gift, because the reality of his non-aerodynamic toboggan is a science-based challenge. The ideal aerodynamic shape is that of a teardrop— a semicircle tapering to a point, far removed from Santa’s irregularly shaped, clunky mode of travel. Such a non-streamlined shape creates drag, meaning that air pushes against the vehicle, adding resistance and making it more difficult to move quickly, With this in mind, it is entirely possible that Santa’s elves have been adding quite a lot of rocket power along with the addition of a nanostructured skin to hold onto the flowing air, reducing drag by up to 90%. This combination makes the sleigh more efficient and thus more capable of delivering gifts to the entirety of the world in an extremely short space of time.

Worried that the sonic boom will wake the children? Fear not, for Santa will most likely be using this[2] technology to reduce his sonic boom to a light rumble as his super-powered sleigh breaks the sound barrier (we already know that Santa is flying faster than the speed of sound, which is around 767 mph).

The next hurdle to overcome is how to carry all that weight in what appears to be a standard-sized sleigh. There are approximately 2.2 billion children in the world, but Santa doesn’t deliver to all of them (he needs to cross off the naughty children and those who do not celebrate Christmas), so we can safely estimate[3] that he delivers to around 500 million households worldwide. This is a feat he needs to accomplish overnight, but not in as few hours as we assume; if Santa works east to west, he can manipulate time differences and the hope that children will sleep for eight hours, giving him 32 hours to play with[4].

When we consider time taken to decamp his sleigh, enter the house in question, drop the present, eat a mince pie and swig some milk, climb aboard the sleigh and holler a resounding, ‘Ho Ho Ho’ to get the reindeer going, he has just 223 microseconds per present drop. This doesn’t leave any time for him to head back to HQ to re-stock, so we can presume that either all the presents are already on his sleigh, or that they’re made during flight. According to NORAD (North American Aerospace Defense Command), the gifts aboard the sleigh would weigh 60,000 tonnes, if not made during flight. So, where does the energy to fly this beast come from? The answer is obvious: milk and pies. To simplify, Einstein’s E=mc2 is 100% efficient, meaning that when the reindeer sneak the pies and milk from under Santa’s nose, all the festive-fuelled energy goes into transporting their master’s sleigh. According to this in-depth calculation[5], each reindeer would need to consume at least 1,656,024,685,714 calories. That’s a mighty 573,089,224 pies. Best get baking.

The other option is, of course, that the presents are created during flight. The technology involved in this is far more advanced than we currently use on earth, and involves some sight tweaking of the rules of physics, but nonetheless nothing more extreme than other recent discoveries. The key is the ‘Magic Sack’ — a device that uses the soot from chimneys alongside materials collected en route to ‘magic’ gifts for recipients via advanced 3D-printing technology. We prefer the E=milkandpies2 explanation.

And why is Rudolph’s nose red? Well, yours would be too if you were absorbing over 15 quintillion joules of energy each time you re-entered the earth’s atmosphere.